The often elusive American rock and roll band SURPRISE ME MR. DAVIS, comprised by members Nathan Moore, Brad and Andrew Barr, Marc Friedman and Marco Benevento, have announced an April 13 release for their long-awaited EP, THAT MAN EATS MORNING FOR BREAKFAST. On the same day, the band will commence their first shows of 2010 with a five date Northeast run that begins in Boston, stops in Providence and Albany, and concludes with back to back nights in Brooklyn and New York City. Later in the month, they’ll play two late night shows during the New Orleans Jazz & Heritage Festival.  SMMD also plans three dates in the Northwest at the end of June before heading to California for two sets at High Sierra Music Festival.

THAT MAN EATS MORNING FOR BREAKFAST, also known to fans as the “demo sessions,” took a circuitous route from seed to market. Nathan Moore explains: “I was on my way with Marc Friedman to Montreal where we were going to record in Brad and Andrew Barr’s new studio. Unfortunately, I got turned away at the border. We soon found ourselves back in Burlington, Vermont drinking in a bar. Brett Hughes, a local musician there, was like ‘just come into my barn studio and do it.’ So Brad and Andrew came down this way and we ended up recording there all week at Brett’s house. We got all these tracks done and then we went back into another studio and tried to work them up even bigger, but we started to feel that we were exceeding our initial ideas by trying to make them too big. In the end we reverted back to the original demos. They had the raw spirit and energy we were trying to capture. So now it is finally seeing the light of day.”

The seven song EP will be available at all major digital retailers, including iTunes, Amazon and Emusic, while a limited edition CD release will be sold exclusively at the band’s shows and through their website. 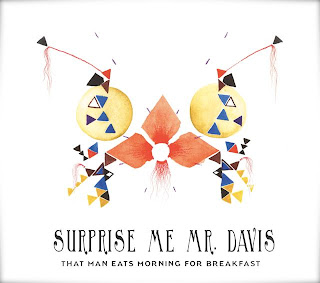 The track listing for THAT MAN EATS MORNING FOR BREAKFAST is: